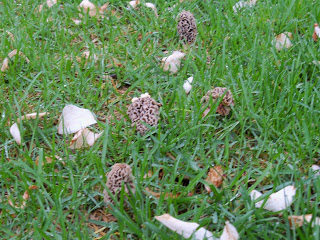 Mushroom hunting is a favorite pastime for many local residents. Morel season, in particular, is a particularly busy time, as Morel season begins in mid  April in Central Ohio.  The elusive morel mushroom starts appearing in the woods around the middle of the month, right in the height of spring, depending on weather conditions.   Apparently weather conditions right now must be very good because we’ve been hearing about a lot of big finds.   Of course we’re also hearing stories about “the ones that got away” and mushroom hunters who have come up empty-handed.

The inn’s Spring Nature weekend, usually held the last weekend of April, generally coincides with mushroom season, and while they’re out in the woods birdwatching and doing other pursuits, our guests also keep an eye out for mushrooms.  Any of their finds are carefully prepared and cooked as an appetizer at dinner on Saturday evening.

It was with great surprise and delight that innkeeper Yvonne stepped outside early this morning to take the inn dog Dougal for his walk and noticed something unusual in the grass beside the driveway.   Stepping carefully, she bent down for a closer look and realized, yes, indeed, there were a handful of morels growing no more than 25 feet from the inn.    Closer inspection of the area revealed a total of 17 of the tasty little darlings.   Which is going to make Easter Dinner very enjoyable indeed.